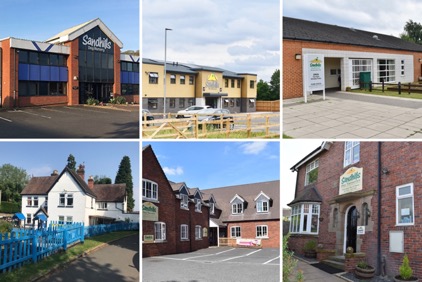 The Old Station Nursery Group which is part of the La Maison Bleue (LMB) group has acquired Sandhills Limited, a group of 6 childcare settings situated across the Wolverhampton, Birmingham and Boston areas in a deal brokered by childcare property experts Redwoods Dowling Kerr.

Sandhills Limited was founded by a husband and wife team in 2005 after realising they had very little time to spend together within their careers. In addition to also raising their young daughter, they decided to start their own business together and fell in love with the childcare sector. Their original intention was to exit the sector in 2021/22 but given the current favourable market conditions they instructed Redwoods Dowling Kerr who delivered their future value with a highly confidential off-market sales process. In the words of the vendors “We initially had no intention of selling.”

Throughout the years the renowned standards of care resulted in a phenomenal surge in demand, seeing the nursery group grow to 6 settings, with the Boston, Wombourne settings being purchased in 2010, Heath Mill joining in 2017 and one of the UK’s largest nurseries, Sandhills Wolverhampton opening its doors in 2019. The group has a combined capacity for 588 places.

Sandhills Limited was acquired by The Old Station Nursery group which brings the group to 17 nurseries and one after-school club in the UK.

La Maison Bleue (LMB) is one of the three largest players in the French childcare sector, the leader in Switzerland and the third largest player in Luxembourg. Back in February, the acquisition of The Old Station Nursery represented their first investment in the UK market and has presented them with a solid platform for growth. Founded in 2004 by Sylvain Forestier and Antonia Ryckbosch – a childcare professional – La Maison Bleue has built a strong and innovative educational project, where the quality of childcare provided is of paramount importance.

“We are very excited about the acquisition of Sandhills and look forward to continue building up the legacy of the founders. Following the nurseries viewing, we’ve been very impressed with the vendors achievements since the acquisition of their first nursery in 2005 and have been able to agree with the vendors on the sale of the group within a short timeframe thanks to Redwoods involvement. We are extremely delighted to further consolidate our position in the UK and look forward to working with Jenna and the team from Redwoods on new acquisitions in the future”

‘We are delighted to welcome the staff, children and parents of all the Sandhills group to our Old Station family, and look forward to working closely with them in the future. We feel that there is a really good fit between the nurseries and those that we already operate, with a real emphasis on high quality early learning and great customer service.’

From our initial conversation with the vendor, it was clear that this was a group of exemplary quality and that to achieve the very best results we would need to work closely with them to showcase the potential on offer, both current and future. La Maison Bleue saw the opportunity it its entirety and a sale was swiftly agreed with both parties wanting an expeditious completion. It was a pleasure to work with both parties. The vendors had a three-year plan for exit but once they learned what Redwoods Dowling Kerr could achieve for them they made the decision to accelerate their plans, realise the benefits of their labours and utilise the time given to them to focus on new challenges and enjoy more family time.

Back to News & Press

Susy’s Tearoom Is Now Sold Thanks to Bruce & Co.

This unique tearoom in a picturesque Tighnabruaich, Argyll and Bute location is now under new ownership. Originally established in the 1940s, this community tearoom has been under the professional ownership of the previous vendor for over 20 years. Over the last 2 decades, the business has consolidated its place within...

We are delighted to bring to market a popular high street café, established for over 40 years, for sale in Tooting,… https://t.co/59yykoL0RI

Café Fresh Has Been Sold Thanks to Bruce & Co.

This bustling café in Dunfermline, Fife is now under new ownership. This popular and unique Scottis...
Read more...

Please register with Business Buyers to make use of our great features.